I posted about my exciting Wednesday (9/16/2015) in Washington, DC, but I have more memories and pictures besides that one very awesome day!

I want to be able to relive it again and again … so am writing about it now so that I will remember everything in the days to come. Chemo brain … old age … a combination??? I don’t know, but my old noggin doesn’t necessarily retain thoughts and memories like it once did.

I’m not complaining! I just have to make concessions and do things differently so that I have ways to jog the memories.

So, without further adieu, let’s get on with the story!

I arrived in DC on my birthday, 9/15, around one o’clock. I was so grateful that AACR allowed me to go a day early so that I had time to rest and relax … and do some sightseeing! There was no time for sightseeing on the two days that I was there to work.

Our – the Dallas Cowboys – arch rivals have DC as their home. Needless to say, when I disembarked from the plane, I entered Redskin Country! There’s a lot of debate about the name of the team, but for now, it remains, the Washington Redskins.

I was so blessed. AACR contracted for a limo to pick me up at the airport and whisk me to the Mandarin Oriental – my home away from home for 2 nights. It is a gorgeous hotel, exceptional staff, great location, and unbelievable views!

I ate a few times in the hotel restaurant – the Muze – where the staff was impeccable and the food fabulous!!! I was amazed that they held the restaurant open for me after hours when I arrived. You would have never guessed the staff was working late – they were so friendly and anxious to serve. I ate a crabcake sandwich which was delicious!!!

On Wednesday morning, I returned to the Muze for breakfast, prior to beginning my big day! I am so glad I did since breakfast had to last me until we arrived at the reception that evening. I was hungry, but not as famished as I would have been otherwise! I ate some Eggs Benedict with salmon – again, to die for!!! Wish I had some about right now!!!!! Now, the $8 coffee … it was good … but $8???? If I had looked at the price of coffee, I can assure you I would have been satisfied with water!!!

The last time I was in DC, I didn’t get a chance to see the sights at all. This time, I was fortunate enough to get to go on a night-time tour. I still haven’t seen everything I hope to see in DC, but I got to see a lot. For that, I am very grateful.

I took a ton of pictures and I’m going to post a whole lot of them here. It is an easy way for me to find them and to see them. I hope you enjoy them, too! The tour began at  Union Station. I got there early, so I spent some time exploring. 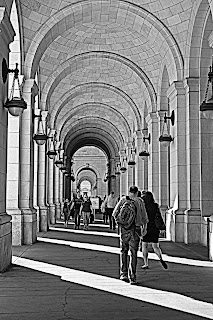 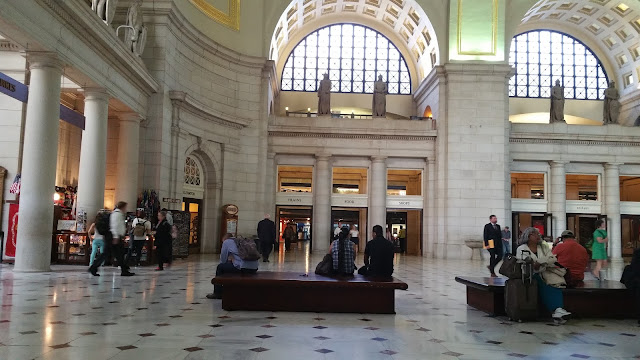 The buildings in DC are just so gorgeous. So old and yet so well maintained. It is incredible! There is a feeling when in the Nation’s Capitol that you just don’t feel when you’re in Dallas or Houston or Denver. Power, awe, history … something!

So, the night tour took us either past or to several of the monuments. I have a big desire to see the World War II Memorial, but that desire remains. I didn’t get to see it on this trip either. Maybe next time. 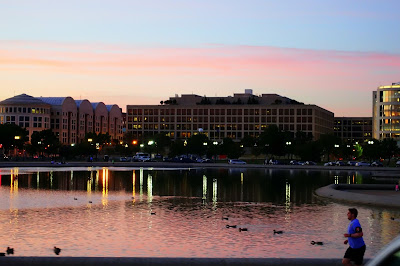 We drove by Memorials and stopped for three. My camera did a pretty good job of capturing scenes as we drove by!  The pictures above were taken through the bus window.  I sat near the bus front door. I might have had better vision and clearer shots if I hadn’t sat down so quickly.

I took lots and lots of shots of the Washington Monument. I don’t quite know why, but it fascinates me. Amazingly, you can see this 555-foot marble obelisk that honors our Nation’s first President from all over DC.  I didn’t realize that until the night I took this tour.

I never got close to it. In fact, I had no idea that you could get tickets to go up inside of it. What an awesome experience that would be!! The following quote is copied from Recreation.gov:

Visitors enter the Monument and then ascend via elevator to the 500-foot level to behold sweeping views of the city. Captivating exhibits on the 500- and 490-foot levels illuminate the contrast between historic photographs and modern views, while inviting you to learn more about Washington — the man, the engineering marvel of the Monument, and the design of the city named in his honor. On descent, visitors have the unique experience of viewing selected commemorative stones expressing the sentiments of generations past awed by Washington’s impressive leadership.

Another Monument to add to my Bucket List!!!! Seeing it from afar is grand enough! But, seeing it up close sounds like an experience to remember! Tickets are required if you are going to enter the Monument. 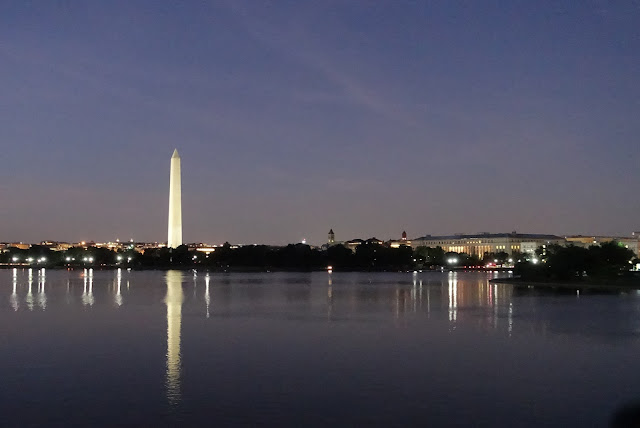 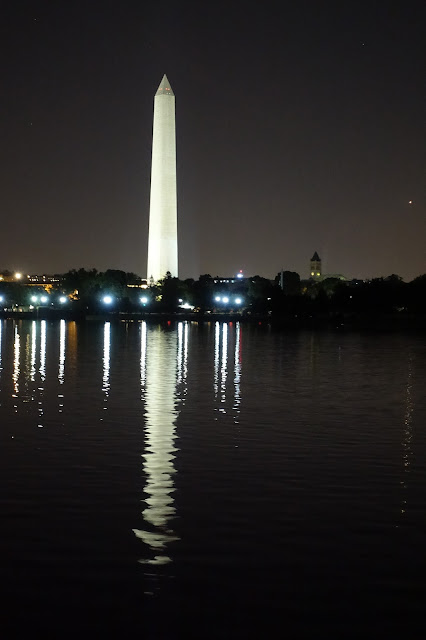 The Memorial that honors Franklin Delano Roosevelt covers 7-1/2 acres, which makes it the largest Presidential Memorial on the National Mall. This is a relatively new Memorial. It didn’t open until 1997. It covers the four terms that FDR served as President. 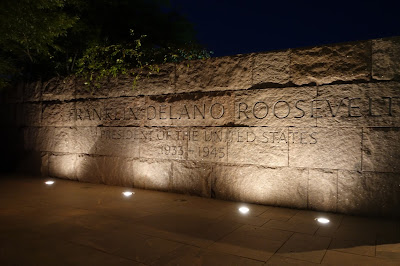 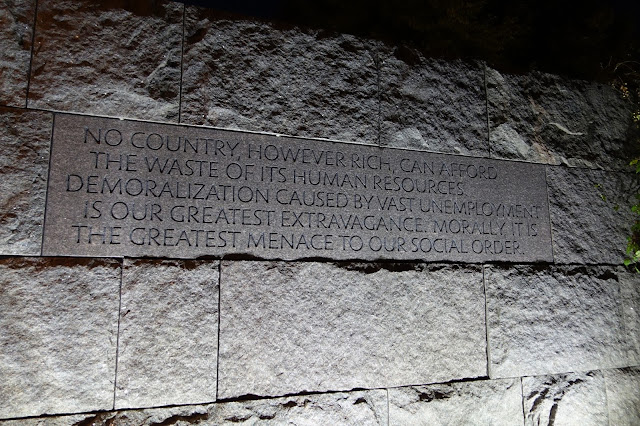 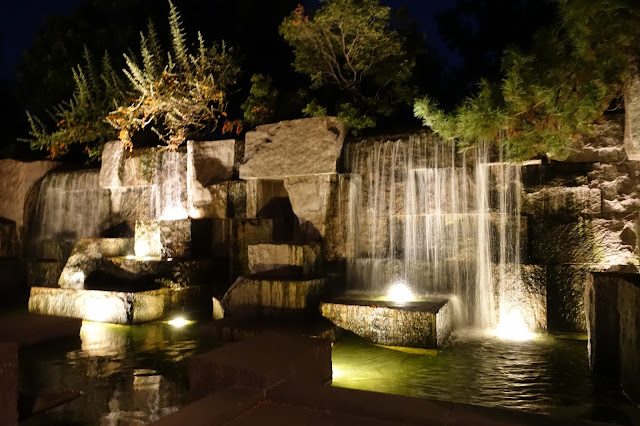 Visiting this Memorial at night was striking. However, I am not certain we saw it all. I think we did not. We were not given but a few minutes at each stop so we had to hurry as we viewed them.

The Martin Luther King Memorial is nearby, but I wasn’t entirely sure where. I apparently spent too much time enjoying the FDR Memorial so I did not see it. If I get to go again, I hope I can spend more time at the FDR Memorial and can find the MLK Memorial, as well.

Back to the bus!! A traffic jam caused us to divert first to the Marine Corps War Memorial, instead of the Lincoln Memorial, as planned.

My husband, brother, son, and cousin are all U.S. Marines so I have a real soft spot in my heart for anything Marine! This Memorial is certainly no exception! I had seen it several times, but never had the opportunity to get out and get up close to it. I was very glad our bus tour took us there and gave us 15 minutes or so to enjoy it. 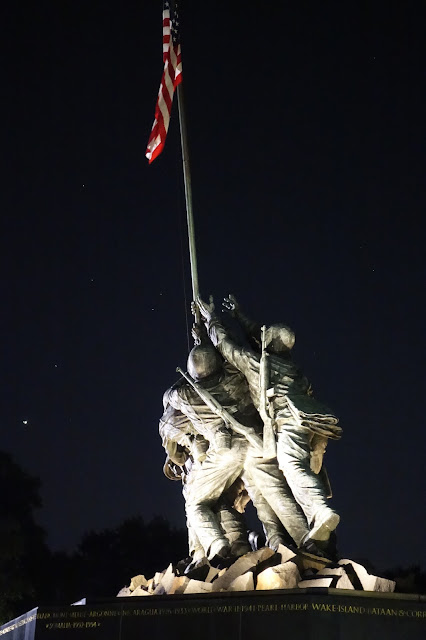 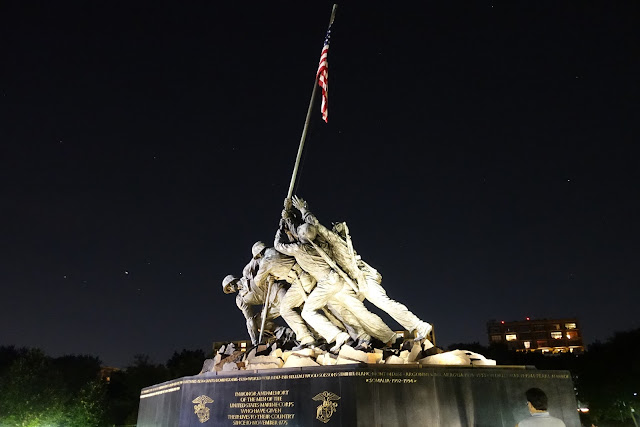 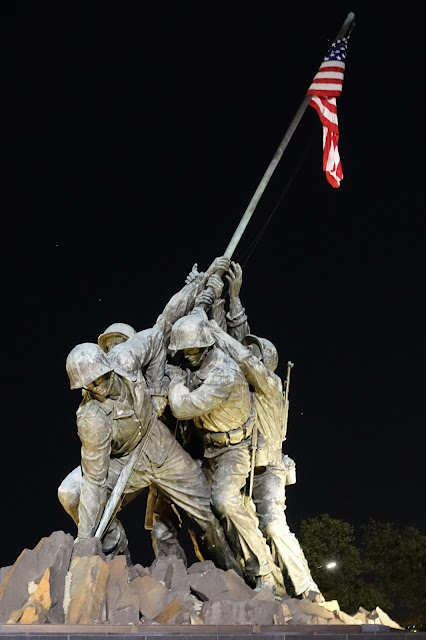 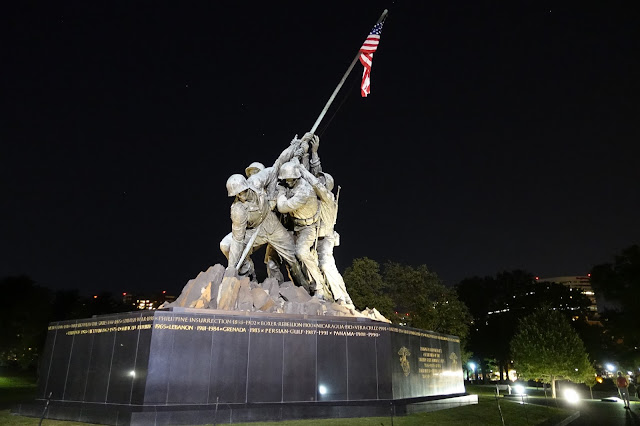 According to the National Park Service, “The US Marine Corps War Memorial is located on Arlington Ridge along the axis of the National Mall. A panorama of the Lincoln Memorial, Washington Monument, and Capitol Building are visible from its grounds.” I did not notice the Lincoln Memorial, Washington Monument or the Capitol when we were  at the Memorial. I must have been too focused on the Memorial itself.

Maybe one of the most famous of the Memorials, we visited the Lincoln Memorial last. During this visit, we also had a moment to spend at the Korean War Memorial. The Vietnam Memorial was said to be nearby, but I was unclear about where it was. I didn’t have time to visit it anyway. The night tour was awesome in many ways, but choices had to be made since the time was so limited. 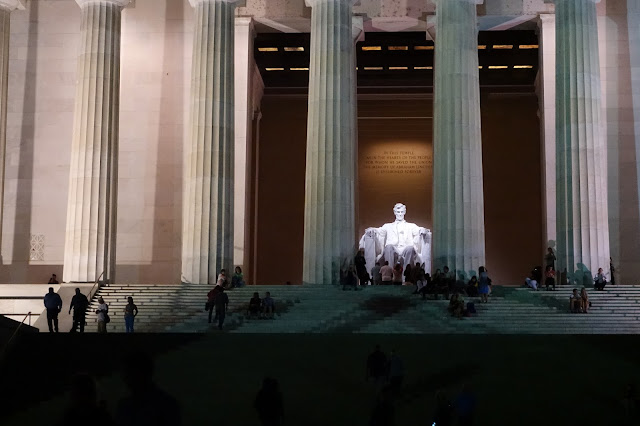 We made a quick trip down beside the Reflecting Pool to find the Korean War Veterans Memorial. It gave me chills. The pictures still do. 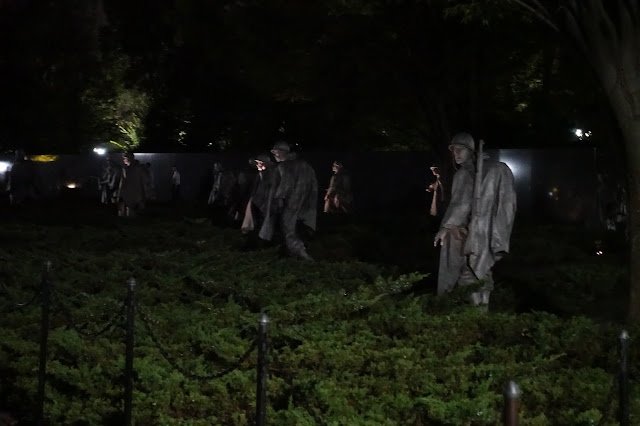 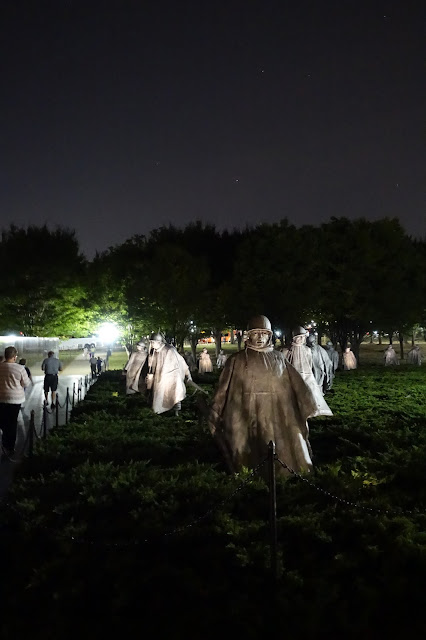 The tour was nearly over. I managed to snap a few more pictures as we headed back to Union Station. 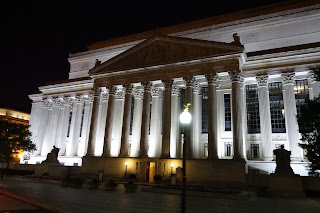 I am so glad that I had the opportunity to see Washington, DC at night. It not only kept me from obsessing about the speech I had to give the following day, it allowed me to see monuments and memorials that I had either never seen or hadn’t seen in many years. I hope that the next time I go to DC, I can go as a tourist for at least a full day or two. Unfortunately, it is very, very expensive to stay in DC. On the other hand, all of the memorials and the Smithsonians are free to attend.

I hope you have enjoyed this tour as much as I did!